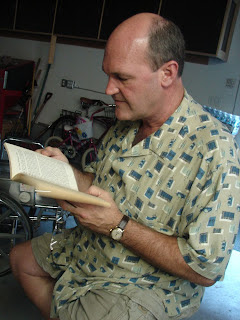 We talked a lot about head injuries during The New Monastic Workshop. Seems like all of us have endured some good head wounds, over the years. Brother John Eiler even has the management of a Southern Californian brain injury clinic on his curriculum vitae.
I sometimes wonder about the parts of my brain that must have taken a dent from a football helmet, or car, or dad, or curb, or barbed-wire fence, or chunk of ground after a fall face-down from a tree limb. I wonder if some of my gray matter didn't get zigged or zagged in a way that left me more susceptible to intensity. Maybe this explains why I'm such an idea thrill freak.
Because I love the hot ideas. I get really restless with the ideas or the pursuit of ideas that doesn't aim all the way for heaven or all the way for hell. I start jiggling my leg and singing to myself if the intellectual temperature doesn't start to climb.
I seriously think this has something to do with my getting whacked on my head so many times. Or maybe I was trying to make it stop?
I know this is why I have been carrying "Young Workman's Letter" by Rainer Maria Rilke around all of these years. This is some hot thought here. I would say the relationship between Christian orthodoxy and human sexual nature is one idea that leads all the way to heaven and all the way to hell. That's what this short story is really about.
Rilke uses the frame tale of a letter being written by a factory laborer to a famous poet. This makes for a stodgy beginning and abrupt end. I have my ideas about why Rilke did this, but it has the effect of straining a serious reader's patience, especially at the outset.
I brought the story (included in Where Silence Reigns, a collection of the great poet's prose) to The New Monastic Workshop. I sprung it upon Brother John Eiler, just as the last Open DJ Spin wound down in the garage, in The Monastic Smokehouse, where all the other monks had been all smoked out.
The hour was late, the weekend long, the story's opening stodgy. Local hip-hop was thundering all around us. John got lost. I didn't blame him. I just took back the book and read him the hot thought hidden in the stodgy letter form:
"Why, I ask you, Mr. V. [the famous poet the workman's letter is being addressed to; Emile Verhaeren is a plausible ID for "Mr. V."], when people want to help us, who are so often helpless, why do they leave us in the lurch just there, at the root of all experience? Anyone who would stand by us there could rest satisfied that we should ask nothing further from him. For the help which he imparted to us there would grow of itself with our life, becoming, together with it, greater and stronger. And would never fail. Why are we not set in the midst of what is most mysteriously ours? How we have to creep round about it and get into it in the end; like burglars and thieves, we get into our own beautiful sex, in which we lose our way and knock ourselves and stumble and finally rush out of it again, like men caught transgressing, into the twilight of Christianity. Why, if guilt or innocence had to be invented because of the inner tension of the spirit, why did they not attach it to some other part of the body, why did they let it fall on that part, waiting till it dissolved in our pure source and poisoned and muddied it? Why have they made our sex homeless, instead of making it the place for the festival of our competency?"
We promptly read Rilke into The New Monastic Canon, or Cannon.
Rethinking this hot thought now, it seems Marvin Gaye has to go right into the Monastic record along with Rilke. "Sexual Healing" makes the same argument - in far fewer words.
Posted by Poetry Scores at 6:19 PM