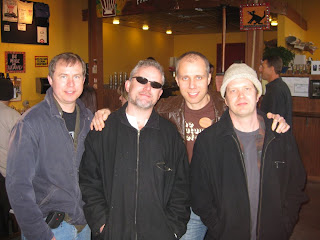 I spent the past weekend locked into a garage in Nashville, Tennessee with these guys. It wasn't nearly as bad as that sounds.

The garage has been converted into a state-of-the-art recording studio, with an upstairs loft suitable for sleeping (if you are used to being in rock bands together and sleeping on floors); and we locked the doors at night simply so none of the fancy gadgets would walk away down the alley into the night.

As of this year, I have been recording music with these three guys for twenty years. For it was in the summer of 1989 that we recorded the 90-minute cassette Why It's Enormous Richard's Almanac with the band Enormous Richard, which featured Matt Fuller (stocking cap) on drums, Elijah Shaw (the most bald head) on color instruments, and me (shades) on vocals. Dave Melson (far left) wasn't in that band, but he played on a song that ended up on the Almanac, so 2009 counts as an anniversary for him, too.

We found each other through the Washington University rock band scene, which seemed pretty fertile at the time, though I couldn't have guessed that it would yield my lifelong companions and collaborators. It's funny - I lived for six years in New York City, one of the best music cities on the planet, but I was musically miserable the entire time, because I was too far away from any of these guys to play music with any of them on a consistent basis.

We still mostly don't live in the same town. I'm back in St. Louis with Dave, but Matt has lived for many years in Los Angeles, where he draws storyboards for a living, and Elijah (who now goes by the family nickname of "Lij") is feeding his family making great records in that Nashville garage, known as The Toy Box.

But we have studio options in St. Louis (shout out to Grammy-nominated Adam Long), and St. Louis is close to Nashville, just a road trip away, so being back home has returned me to my musical center. I am deeply grateful for the opportunity to make music again with these talented, diligent fellows who - for whatever reasons - have always been willing to work with me and develop my inchoate ideas into living, breathing songs.

We went to Nashville to work on the poetry score to The Sydney Highrise Variations by the Australian poet Les Murray. Our band name on poetry scores is Three Fried Men. I have posted rough mixes of the ten tracks we worked on over at the Poetry Scores blog, and probably I am saying these things (all true) about my buddies as an excuse to point Confluence City visitors over to that there Poetry Scores blog to hear them there rough mixes.

The picture was taken by some stranger at Yazoo Brewing, where the beer is delicious, the people are nice, and the girl who conducts the brewery tour we didn't take is incredibly beautiful. My fellow beer geek Dave Melson and I collaborated on a new Toy Box tradition in buying a Yazoo growler and leaving the empty bottle at the studio with eight bucks under it to pay for a refll so the next band that comes through has a little starter beer. It's the least you can do when you're living on free studio time.
Posted by Poetry Scores at 1:04 PM