Bootblogging #17: Yet more The Lettuce Heads 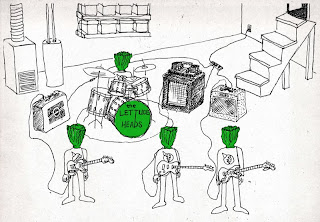 I wouldn't believe it had I not seen it with my own two eyes, but for the first time since it was recorded in 1993, my favorite-ever St. Louis rock band The Lettuce Heads has its best-ever record ready for purchase by the music-loving public.

Three of the Lettuce lads did a gig today at The North City Farmers Market that I was supposed to be on (I did make a cameo market appearance as alleged "celebrity" judge of local produce, casseroles and pies); and I was stupefied when Carl Pandolfi presented me with a copy of the record that almost looked professionally produced.

I am dismissive of their professionalism on specific grounds. These guys are expert songwriters and musicians, on par with anyone in rock music who is paid to do these things, but they have all the crass careerism and self-promotional gifts of the knobby little spud I judged today to be the Best Strange Vegetable on display.
Hence the sly hilarity of the title under which they released this epic rock record, For Promotional Purposes Only. Ha ha ha ha ha ha ha. They recorded it in 1993 and "released" it a free 2009 gig at a farmer's market in North St. Louis attended by more children - more weird vegetables - than hipsters.

I have been threatening to release the record for ten years, which lets you know you never want to leave it to me to release your record for you. My title was to be When You Blink, a line from one of the songs - as in, this amazing band and its unreleased masterpiece all happened when you were blinking. Gone in the blink of an eye!
But back! In a blink.
mp3s

I am just guessing who wrote which song - I guessed the lead singer is the writer.

How do you get a copy of the entire cd? You're asking me? Me who delayed ten years to release the record for them? And left it to these self-saboteurs to do it themselves?

I saw Ferber at the Bottleworks Thursday night. We're going to work on getting the Lettuceheads back to the Tap Room around Thanksgiving or Christmas.