Bootblogging #24: Three by The Modifiers


We made a record for Pops Farrar and used to offer it for sale on the internet. We'd fulfill a few orders a year, always from an Uncle Tupelo or Son Volt diehard who wanted to hear a record by Jay Farrar's father. One guy stood out.

I don't recall exactly how we got buddied up with this guy, Chris Perry of Boston, or why it happened so fast. But right off the bat, we were mailing precious photographs to each other and plotting road trips.

After our first trip to party with Perro (as we call him) at home in Boston, Joe Esser said, "This feels like a sock I have worn a zillion times." Perro and his spouse Esme have been deep in my heart ever since.

The first time I met Pops, I told him I wanted to come over to his house and record him singing and playing accordion and concertina. He said, "Why, Chris, don't just talk about it -- do it!" I did it.

Perro is very much like that. Near the end of Pops' life, he was among my closest friends. I often offered to share Pops with people, because it was essential to Pops' nature to share, but not everyone who would have benefitted took me up on the offer. Perro did it.

He and his buddy Mark drove to Belleville from Boston, stayed at Pops' spread and went native in what Pops called "the Belleville rainforest." I am sure that Pops remembered Perro until the very end.

Chris Perry does not push his band on you. But he leads a band, The Modifiers. I like his band.

My pawnshop guitar and some fellows from The Cure


Little story about a pawnshop guitar, an Alvarez acoustic.

I picked it up at the pawn shop on South Grand in St. Louis for $75. I got a lot of songs out of that guitar, and then passed it along. My buddy Meghan Gohil was starting Hollywood Recording Studio, and studio guys love to have guitar options.

Now one of his steady studio gigs is recording Levinhurst, a project led by Meghan's good friend Lol Tolhurst. Lol was a founding member of The Cure, and Levinhurst is Lol's project with his wife, the equally talented Cindy Levinson. Really great stuff.

Michael Dempsey, a friend of Lol's (and a fellow founding member of The Cure), joined Levinhurst recently to record an e.p. at Hollywood Recording Studio. Michael took a picture of my old pawnshop guitar.


"If you'll note, the high E string is removed," Meghan pointed out. "Michael asked me to take this off for the recording sessions, so he essentially played it as a five-string guitar. Most five-string players, like Keith Richards and Pete Townshend, typically remove the low E string."

Michael played my old pawnshop Alvarez on their record. Here he is working out a song with Cindy on it.


"You can see three amps in the picture," Meghan notes: "the one on the bottom right is an old Sears Silvertone (my first guitar amp, bought out of the catalog for $79)."

The record these folks made with my old pawnshop guitar and Meghan's out-of-the-catalog amp is really terrific! I'd call it shimmering hypno pop. In the first of the three songs on the e.p., "Somewhere Something," the acoustic guitar establishes the arrangement and the texture of the mix. My old acoustic guitar, in Michael Dempsey's hands, is in very good voice. Check out their e.p. on iTunes.

"Somewhere, Nothing is Everything"
Levinhurst

This week and next week, Meghan tells me, they're going to be broadcasting songs from the new e.p. on a show called "The Lopsided World of Jonathan L," an internet radio show that plays on stations based in Athens, Berlin, L.A. and Phoenix. (More on that also at http://jonathanlradio.blogspot.com/.)

I asked Meghan for a video of The Cure back in the day where Lol and Michael are featured. The official video for "10:15 Saturday Night" has good looks at Lol on drums and Michael on bass, as well as of course Robert Smith on vocals/guitar. What a very great band The Cure was when Lol and Michael backed up the very young Robert Smith.


Lol starts "10:15 Saturday Night," with his simple stick on cymbal, and Michael closes it with an intense, unadorned solo bass figure. I really like the thought that the musician's hands that finished off this absolutely perfect piece of post-punk rock by The Cure have now voiced chords on my old pawnshop Alvarez.


Posted by Poetry Scores at 2:49 PM No comments:

Songs from Home: "After the Money from Mama was Gone" by Bob Reuter 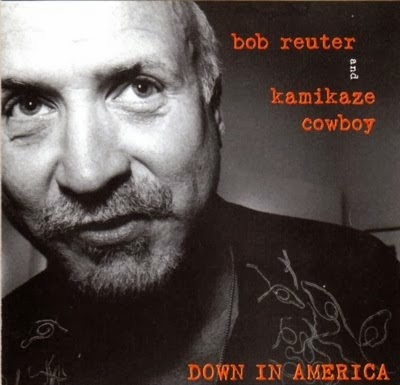 Under the band name Three Fried Men, we have been recording songs by St. Louis songwriters of our generation. Next up: "After the Money from Mama was Gone" by the late Bob Reuter, with Fred Friction on lead vocal.

NOTE: NOT SAFE FOR WORK OR ALL AGES.

"After the Money from Mama was Gone" was recorded by Bob Reuter and his band Kamikaze Cowboy on their record Down in America (2000), produced by Michael Martin at the Broom Factory in St. Louis. A lot of us think that's one of the best records ever made in St. Louis by anybody, so follow that there link to the Kamikaze Bandcamp page.

Bob Reuter's songwriting speaks for itself more eloquently than anyone else could, but in this song I especially savor how Bob dwelled on local detail and picked out place names from his north St. Louis city and county environment, like Bruce Springsteen bravely putting the Jersey shore towns and interstates on the map of American music.

And the bad kids down there on Hall Street,
burning up engines and wine,
burning like sunstroke, drifting like cowpokes,
bursting in flames up off of the line

and a St. Louis drag racing landmark has been burned forever into public memory. Bob always stayed a sure step ahead of his critics - it was no surprise, when KDHX gave him his own radio show, to discover that he knew everything about American music - and I submit that Bob knew exactly what he was doing right here within the tradition of American story songs, and that is what the cowpokes are doing in the imagery (in addition to supplying a gorgeous internal rhyme): that's Bob tipping the Kamikaze Cowboy hat and whistling across the smoking tip of his gun.

I love to work with Fred Friction as a vocalist, have done so for many years, and thought of him first when I got the itch to record this song. When I called Fred about the idea, he pretty much shouted, "Yes! That has always been one of my favorite of Bob's songs!" Nick Barbieri recorded Fred's vocal in one single take -- this is the kind of song Fred exhales; it's part of him, it is him. When I shared the final mix and master of this recording with Mike Martin, who recorded Bob's original version on Down in America, Mike agreed that Fred was perfect for this song.

We offer the tribute in Bob's memory.

The song was composed and (c) Bob Reuter and is the property of his estate: http://www.cowboyangel.org/. This cover version is intended for free sharing and non-commercial use with full composition credit and (c) reserved by Bob Reuter and estate. Production-quality audio is available for community radio or local compilations, upon request.

Posted by Poetry Scores at 4:32 PM No comments: 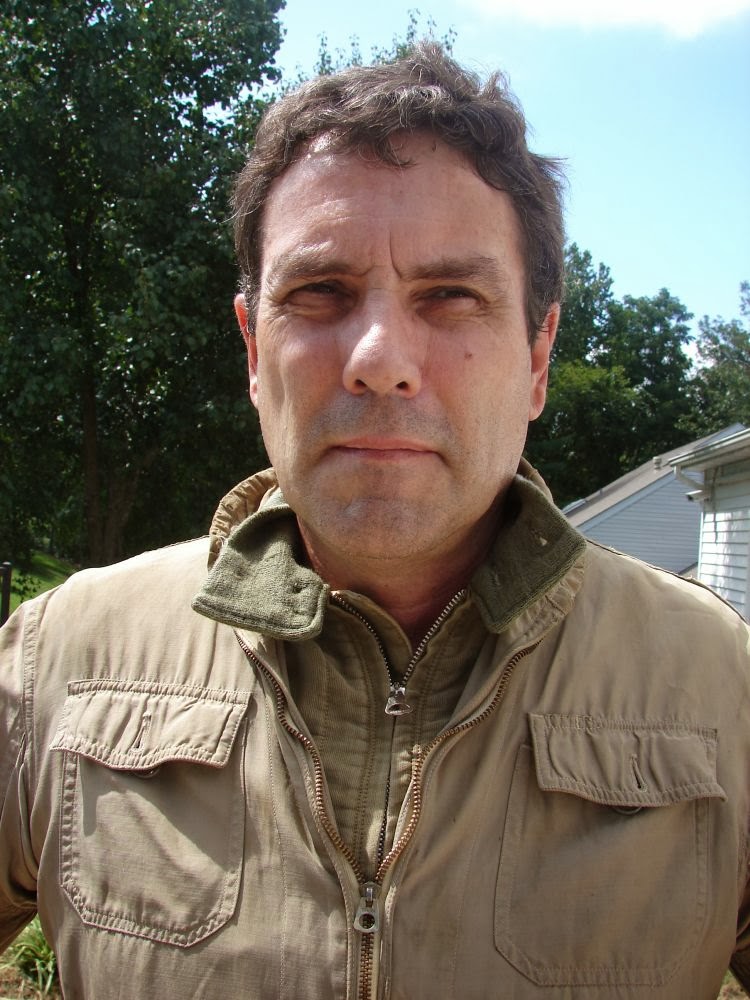 Chuck Reinhart
(at Poetry Scores costume review party, in soldier garb)
Three Fried Men is recording songs by St. Louis songwriters that have been stuck in my head for half of my life. First we did "Had to End Sometime" by the late Bob Reuter. Next up: "Midget's" by Chuck Reinhart.

I know the song from the Guitar Circle, a sort of hootenanny in the round (without the jamming) that flourished in St. Louis in the late '90s and early oughts, centered around Michael Friedman and Roy Kasten. This song really gets under my skin. I actually wept at one Guitar Circle over the line "Is there any reason to update what your heart holds dear?" which strikes me as the perfectly innocent question to ask about growing up and older.

We are posting this performance with Chuck's permission. I very hesitantly asked him if he wanted to tell any of the actual stories behind the song, assuming there are any. I assume there are because the song sounds so much like my own life. I almost don't want to know what Chuck's actual stories are, though, for fear that learning more about the song would diminish the spell it casts on me.

Chuck is not much of an e-mailer, doesn't seem to have a social media presence. I'm not waiting for his answer about the stories behind the song - it could be a long wait - though I will add his story here if I get anything.

I don't know much about the composer. Chuck and I have been at many Guitar Circles together, but that was all about listening to songs. He acted (extremely effectively) in a Poetry Scores movie, Go South for Animal Index, but those shoots were all hectic business. Kind of the same way I feel about "Midget's," Chuck has a quiet mystery about him I've liked keeping intact. He strikes me as the kind of square-jawed, taciturn, decent, sincere man who belongs in an earlier era of cinema. Though a gal pal gave him a ride to the Go South premiere and found him very pleasantly forthcoming.

I think this comment from Chuck sets his tone. I'd emailed him our recording of "Midget's" to ask for his permission to post it for free sharing, and he responded, "Thanks for taking time out of your one and only life to give my song your attention."

You can hear Chuck Reinhart's own performance of "Midget's" in Confluence City's Bootblogging series.

Previously on Songs from Home

"Had to End Sometime" by Bob Reuter 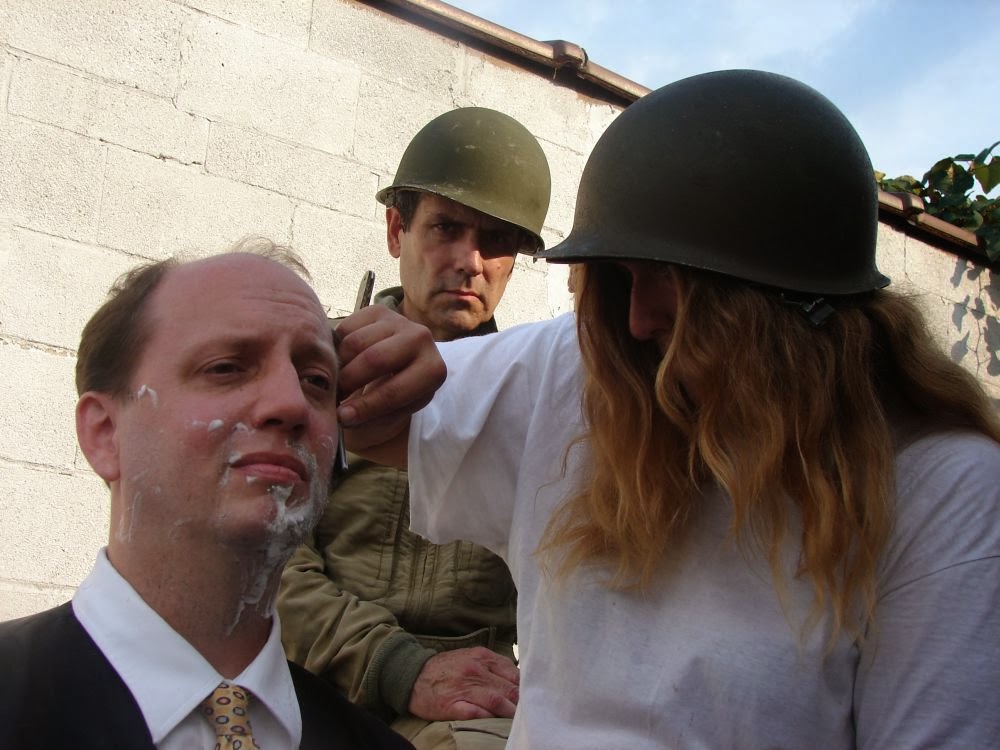 
Posted by Poetry Scores at 4:50 PM No comments: