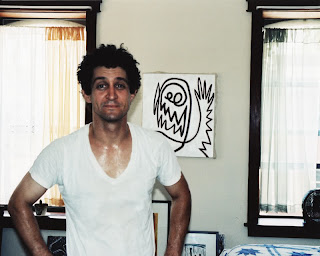 This is big news for old heads in the St. Louis music scene: Grandpa's Ghost has an actual live gig in town 8:30 p.m. Wednesday, Dec 22 at the Lemp Neighborhood Art Center, 3301 Lemp Ave.

The band for this gig is Ben Hanna, William Emerson and Jack Petracek, with special guest Tim Garrigan on guitar.

Notably absent from this lineup is Eric Hall, though he is also on the bill as a solo artist.

Ben writes from New York that this will be the first live show in St. Louis featuring him in the flesh since 2005. Garrigan also is visiting from New York. The holidays are good for reunion gigs (not that Grandpa's Ghost was ever technically disbanded, as far as I know).

In an email to friends, Ben promises a "laid-back acoustic-based performance featuring all new original material". That is good to note, for in a recorded output that now spans fifteen years (1995-2010), Grandpa's Ghost has sounded like wispy folk, tortured folk, grain-belt rock, grain-belt punk, textural noise, end of the universe noise, and lots of other things that would be difficult to describe.

Ben and I have been trading recordings through the mail since he moved to New York, so I have just about everything they have released, which doesn't mean I could find it all in the basement when I looked just now. I did find a few favorites, which I have Ben's permission to post from here; and he also sent an unreleased track that falls into that "all new original material" he is talking about.

See you at the Lemp on Wednesday. After the show, Eric Hall is hosting a Captain Beefheart spin (by another Ben) at Mangia. See ya there, too.


Bootblogging #1: Three by The Lettuce Heads

Photograph of Ben Hanna (with Grandpa's Ghost album art in the background) by Dana Smith from his Asbestos Sister site.
Posted by Poetry Scores at 9:11 PM

That photograph was part of a show I had at Firecracker Press (at their old location - pre-Cherokee St.) 4 or 5 years ago. For each photo I wrote a couple paragraphs about the person. Here's what I wrote about Ben.

Ben Hanna in his apartment-
Ben has been writing and performing in the band known as Grandpa's Ghost for over 10 years now. What started out in a small town in Southern Illinois has now relocated to the concrete jungle of New York City. Ben is the subtle unknown genius that exist every 100 miles or so. In the right conditions he'd have followers in his own religion but here in St. Louis he was just another waiter trying to make it as an artist. Static and fuzz is his medium and there's no one who can draw more precisely with it than Ben. His songs and compositions are heavy with weight yet at the same time they float in the air, light as a feather. He's a performing with nerves of steel, the focus of a laser and the touch of an infant, naive and intelligent at the same time.

This photo was taken in 2005. Ben had called me and asked if I could stop by his place. He was getting ready to move to New York City, it was literally his last day in St. Louis. He said he had some paint to give me. He knew I was a painter and he had some old acrylic paint he didn't want to take with him. He lived above the Lemp Arts Center on Lemp close to Off Broadway. I got to his place and it was in shambles. Everything was everywhere, he was frantically trying to get everything together so he could leave. It was very hot and humid outside and he was sweating profusely. I could tell he was busy but I wanted to talk to him more. I wanted to ask him about music and art and his plans for the future. He said he was going to New York for school, but I suspected he wanted to get to a real city and see if he could make it on his art. He told me I could have his box of paints if I promised to paint him a picture and send it to him. I agreed and thanked him. I had my camera with me and thought I should take a photo, he said that I could take a photo but I could tell he was in a hurry. I got out the camera and snapped a quick one, grabbed my box of paints and left him to pack up his earthly processions and leave this forgotten city. St. Louis lost one of it's greats that day.