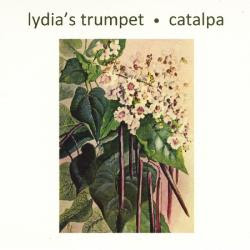 This morning Randall Roberts was musing that he wanted to share some music by Lydia's Trumpet, one of St. Louis' lost chamber pop bands, before anyone thought to name that quirky, at times precious, genre. Randall is one of our local music scenesters done good - he writes about music for the Los Angeles Times - so I wanted to hook him up.

Lydia's Trumpet - led by songwriter and chord strummer Ray Kirsch - was quirky, at times precious, clever but never smarmy, and at times unapologetically rhapsodic. Ray was not afraid to reach for the huge themes and statements, like interstellar distances, the origin and applications of petroleum, and wanting to make it with your girlfriend's mom.

Ray was very warm and likeable as a person, and he made friends with the best rock and pop musicians in the St. Louis scene of the late '80s and early '90s, who all played together in The Lettuceheads.

His friends did that ace rock musician thing where they all played secondary or tertiary instruments to back Ray up, so Lettucehead frontman Mike Burgett was Lydia's Trumpet's nervy drummer, and the best piano and keys player in town, ever (Carl Pandolfi), played bass. I seem to hear Jon Ferber singing, but can't picture him playing an instrument behind Ray.

Tim McAvin, not a Lettucehead, played his typical instrument (then) of electric guitar, but he had this magical way of standing there on stage absolutely puzzled by what he was playing or singing - because they all sang, drip, drip, drip, drip, drip, drip, drip, drip, drip dripping away around Ray. I remember Carl talking about Ray's songs being like a child's drawings, both erratic and beautifully simple, with an innocence the accomplished musicians who played them tried very carefully to protect.

To my knowledge, Lydia's Trumpet made a cassette, Catalpa, a CD, Marmalade, and a 7 inch on Faye Records, Copernicus. I've kept up with most of these guys, and Burgett at some point made me a CD of the Catalpa songs that now survive in my collection only on a compilation I made of Catalpa and my favorite songs from Marmalade. My copy of Copernicus seems not to have survived one of my bouts of between-homelessness as a traveling rock musician.

The last time I saw Ray, I was going over some co-translations of Turkish poetry I was working on at the time, and after milking me for information about the project - he left the conversation equipped to write a chamber pop story song about Orhan Veli and Istanbul - he told me, "You're always doing something that seems hard to do." Then he left St. Louis to learn how to draw maps in Minneapolis. I've not heard of him for many years.

These are my six favorite songs from Catalpa.

The song titles are all best guesses, since I am working from my own naked mix CD, and I'll be happy to make corrections.

The songs belong to Ray and the performances to the band, so please enjoy and share them freely but make no commercial use of them. I do not let Blogger sell ads for this blog.