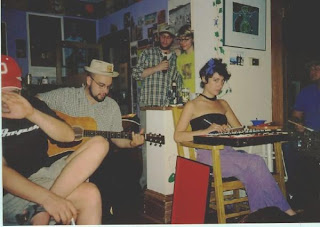 Here's a little St. Louis time capsule for you: a scene from the guitar circle at Matt Fernandes' house in the summer of 2004 to observe my move home to St. Louis from New York City.

Left to right: KDHX host and unsung producer Roy Kasten, cracking up; Tim Rakel, then of Bad Folk (also of KDHX) on guitar; the writer and Flickr man Thom Fletcher and the poet Stefene Russell (also of KDHX), peering in; and Sunyatta Marshall, not yet then of the Helium Tapes, on the Glockenspiel.

The guitar circle, which has fallen out of circulation, is a local music scene tradition introduced by Roy's collaborator Michael Friedman. In the mid-'90s or so, Michael's little brother was passing through St. Louis. Little brother was emerging from a period of very bad decision-making, and Michael wanted to reinforce something new and good in his life: he had been playing guitar and writing songs.

Better musicians might have put together a jam session, but the Friedman boys, Roy, and myself are all porch musicians. We can't, in fact, jam. We can write songs and play them passably, and we're attentive listeners to a well-crafted song presented by someone else, so that's the structure the guitar circle took. It's a listening circle, more than anything else: you listen to everyone else, one at a time, and then do your own song when it's your turn.

It also always involved more than guitars. People led songs on accordion, handdrum, banjo, and fiddle, and poets did their thing. But we never could come up with a better name than "guitar circle" before it became too late to rename it.

Because of the, a'hem, charisma of some of the regulars, the role of "circle fascist" evolved. This was the person (often Roy or me) delegated to limit everyone to one song at a time, keep the circle moving, and curtail jamming unless it is invited by the songleader.

I miss the guitar circle. We should bring it back, I say.

By the way, the circle pictured above was accompanied by a traveling exhibit of The Skuntry Museum, spread out on Matt Fernandes' billiards table. Tim Rakel is wearing a museum artifact, the late Pops Farrar's fishing hat. At this time in the circle's evolution, not long after the passing of Pops, his fishing hat passed from songleader to songleader, in his honor. Tim is wearing the hat because it's his turn to play the song!
Posted by Poetry Scores at 4:48 PM

I miss guitar circles too. Those were good times.

Thanks for changing the shape of my nostalgia: usually it is for lines--hairline, waistline...now it's for Circles. To quote one of my all-time favorite circle-songs (i.e, songs I first heard at circles)"smoke a bowl and repeat: life's fragile/and I'm almost certain/it was designed that way"