Song sung by a thief crucified next to Jesus 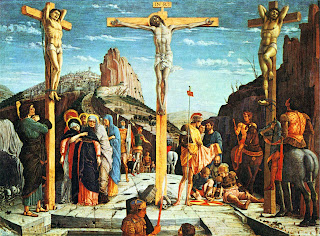 I am doing a little Bible study tonight, to investigate some memories sparked by press reports of the Rough Shop Christmas Party tomorrow night at Focal Point in Maplewood.

Before Rough Shop was One Fell Swoop. John Wendland, Andy Ploof, and company did their Christmas Party with Swoop, too. One Fell Swoop was regular gigmates with my band, Three Fried Men. Out of collegiality, I suppose, they asked me to perform in the show one year, and I accepted.

I got up there and did the only song I know that relates to Christmas in any way, a song I wrote about the namesake of Christmas way back in college and used to perform all around the country with the band Enormous Richard: "Hanging Out with Jesus."

No way around it: it's a blasphemous song, told from the point of view of one of the two thieves (or "evil-doers") crucified on either side of Christ, according to the gospels. I decline to quote the lines that must have been most insulting to the sincere Christians at the party, but the opening stanza sets the tone:
I met Jesus at two bars
Held up by four nails
We both got pretty hammered
We both wore pony tails.
I know, I know, the Christmas cheer is just getting way out of hand here. Needless to say, I bombed and have not been asked back. Let me make it clear that I endorse wholeheartedly the decision not to ask me back!
Reflecting on that awkward memory tonight, I got out my favorite translation of the Christian books of the Bible, William Tyndale's 1534 New Testament (the first complete English translation that bypassed the Latin Vulgate to work directly from the original Greek texts). What does the text itself say about the thieves crucified alongside Christ? Where did I get this goofy idea?

Tyndale's Gospel of St. Mathew:
"And there were two thieves crucified with him, one on the right hand, and another on the left."
Tyndale's Gospel of St. Mark is very similar, but adds a proverb:
"And they crucified him with two thieves, the one on the right hand, and the other on his left. And the scripture was fulfilled which sayeth: he was counted among the wicked."
Tyndale's Gospel of St. Luke casts the thieves in the George W. Bushian term of "evil-doer" and gets them into the action earlier, on the approach to the cross:
"And there were two evil-doers led with him to be slain. And when they were come to the place, which is called Calvary, there they crucified him, and the evil-doers, one on right hand, and the other on the left."
Tyndale's Gospel of St. John, which is thought to derive from a separate tradition than the synoptic gospels of Mathew, Mark and Luke, does not remember these two doomed men as thieves or evil-doers:
"Where they crucified him and two other with him on either side one, and Jesus in the midst."
John does have a new grisly detail about them, however:
"The Jews then because it was the sabbath even, that the bodies should not remain upon the cross on the sabbath day (for that sabbath day was an high day) besought Pilate that their legs might be broken and that they might be taken down. Then came the soldiers and brake the legs of the first, and of the other which was crucified with Jesus."
John goes on to say that the soldiers didn't break Jesus' legs because he was already dead, which suggests the "two other" were taken down before they died and were allowed to live, albeit with broken legs and memories of torture.
But John does not have the banter between the "two other" and Jesus that is recorded in the three synoptic gospels, and which apparently inspired my song.
Tyndale's Mathew:
"They that passed by, reviled him wagging their heads and saying: Thou that destroyest the temple of God, and buildest it in three days, save thyself. If thou be the son of God, come down from the cross. Likewise also the prelates mocking him with the scribes and seniors said: He saved other, himself he cannot save. If he be the king of Israel, let him now come down from the cross, and we will believe him. He trusted in God, let God deliver him now, if he will have him: for he said, I am the son of God. That same also the thieves, which were crucified with him cast, in his teeth."
Tyndale's Mark is very similar:
"And they that went by, railed on him: wagging their heads and saying: Ah, wretch, that destroyest the temple and buildest it in three days: save thyself, and come down from the cross. Likewise also mocked him the high priests among themselves with the scribes and said: He saved other men, himself he cannot save. Let Christ the king of Israel now descend from the cross, that we may see and believe. And they that were crucified with him, checked him also."
Tyndale's Luke provides an actual snippet of dialogue between Christ and the "evil-doers" and distinguishes between the two thieves, with one heckling Jesus but the other doing the right thing:
"And the rulers mocked him with them saying: He help other men, let him help himself if he be Christ the chosen of God. The soldiers also mocked him, and came and gave him vinegar and said: if thou be that king of the Jews, save thyself. His superscription was written over him, in Greek, Latin, and Hebrew letters: This is the king of the Jews.
"The one of the evil-doers which hanged, railed on him saying: If thou be Christ save thyself and us. The other answered and rebuked him saying, Neither fearest thou God, because thou art in the same damnation? We are righteously punished, for we receive according to our deeds. But this man hath done no thing amiss. And he said unto Jesus: Lord remember me when thou comest into thy kingdom. And Jesus said unto him: Verily I say unto thee, today shalt thou be with me in Paradise."
I'll call this the primary source for my blasphemous song, which has its own version of the crucified dialogue between Jesus and evil-doer:
"So God is your old man?"
I asked Jesus, and he said, "Yup!"
"Then answer me, Jesus, if you can.
Why'd he let them nail you up?"
I guess I took the point view of the heckler evil-doer, not the good guy, who spoke up for Jesus and was promised a ticket to Paradise.