Rakel and a Rat take on Haymarket in a suite 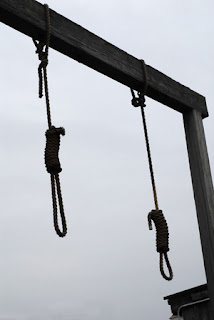 Tim Rakel gets points for prescient timeliness in putting the finishing touches to an e.p. about the Haymarket Affair right about now.

We had lunch today at Mangia to talk about altogether other matters, which come to think of it, we never got around to, and he handed off a homeburn CD I listened to twice in my car today.

Hmmm. Story song set in Chicago that dramatizes the struggle between the workers and the bosses? In a news cycle dominated by the selling of a U.S. senatorial seat associated with Chicago and a bailout of the auto industry that is getting packaged with the busting of the autoworkers' union? Is this 1886 or 2008?

Tim said he has been recording with Brien Seyle from The Rats & People. May Day Orchestra, as they are calling this project, will be a one-off project name, as they plan to adopt a new name for each recording.

Today Tim took on a new task for them, scoring the Stefene Russell poem "Thylacine" from her evolving new poetic sequence The Extinction of Species. For that recording, they will be Sabretooth Unicorn.

The name predated the assignment, which makes it a little odd that Tim picked an extinct tiger, blind, from a small batch of obscure extinct species, when one typically thinks, not of saber-toothed unicorns, but of saber-toothed tigers. And a unicorn is so extinct it never existed at all, except on black light posters.

The Haymarket recording has a very rare quality: it's plotted out, yet loose in feel. The musical approach shifts, from Neutral Milk Hotel soundscape to hootenanny throwdown to dark country dirge to imitative form fiddle jam, as the violin plays hangman.

Personal aside: I'm finally getting accustomed to the fact that Tim's voice sounds so much like Jay Farrar's. Since I grew up playing music in the same scene as Jay, and Tim came along a little later, and I have seen him since he was something of a wee pup, there have been moments when I have wondered if he was affecting his voice to sound like a great local singer he grew up listening to. Whether I've finally accepted that's just his voice or he's been wearing the mask so long it's grown into his face, it doesn't bother me anymore. That alone makes me enjoy this project much more than the Bad Folk recordings.

Tim said he would be releasing the Haymarket piece on vinyl. It's a musical suite in two parts, nicely formed for split sides of A and B. I'll buy one.

Image of two nooses from the Cook County Gallows, originally built to hang the four men convicted in the 1886 bombing of Chicago's Haymarket Square, from the website of the auction house that handled its sale.
Posted by Poetry Scores at 6:40 PM

his voice is similar to Farrar's but it's very much authentic.

Vocals aside, Tim has been a force in the local scene
for some time. It may be the water or Tim and Jay may
have drunk the same whiskey or sat at the same bar stool at 3am. I look forward to anything Tim Rakel.
You can catch him on KDHX.
Here's the link: http://www.kdhx.org/index.php?option=com_kdhxradio&task=playlist&dothis=latest&show=Mystery+Train&Itemid=268