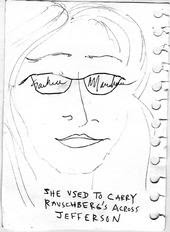 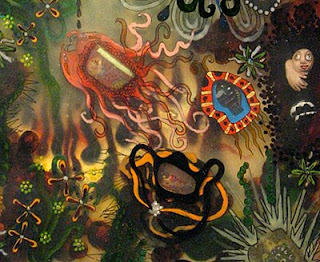 My friend Sandra Marchewa has an opening 6-9 p.m. this Friday, Dec. 5 at Bruno David Gallery as something of a sideshow to an opening by Carmon Colangelo (with Kathryn Neale and Eleanor Dubinsky also on the bill).
This is a sketch I did of Sandra when I used to see her around The Tap Room a lot more than I do now, and a detail from one of her pieces with a title I always liked, Going Down for the Third Time.

When I used to have money to have my art framed, Sandra would frame it for me at Pace, and we would visit when I was dropping it off or picking it up. On one of those visits I got a chance to look at a lot of her work in detail, and I really was thrilled by it.

The strangest and most original work looks like little fish tanks that encapsulate alternate universes. She makes colorful little bizarre figurines and sinks them into resin in a glass capsule that ends up looking like a freak fish tank.

Here's what Bruno David has to say about her work:
"Over the years, her work has developed into layered paintings that often inject transparent paint into the air bubbles between the plexi/resin. Her new work explore constant and dichotomous battle without the comfort of gray area. The space reveals a struggle between content and technique, good and bad, progress and destruction, love and hate, organic nature and synthetic process. Somewhere in between lies the ultimate answer, but the battle is a never-ending history, an exhausting, fruitless search. These flash-frozen conflicts provide a snapshot for further inspection in modern times. Marchewa creates her own world in which to escape, a time capsule or a fantasy existence with its own stories and experiences. The pieces will draw the viewer in to see a shifting contradiction in an almost living and breathing environment, and prove in a sense that water and oil do mix after all."
I'll be home with my kid during the opening, like most Fridays, but promise myself and Sandra that I'll find her and see the show with her before it comes down on January 17.
Posted by Poetry Scores at 7:33 PM

So cool to see Sandra is still kickin' it. I always loved her stuff...