"Chameleon" at the dashboard confessional 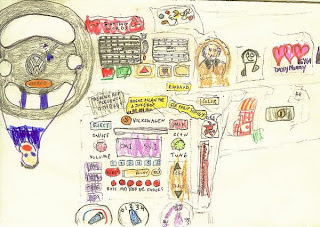 It was an unexpected weekend tour of churches - I visited total of four churches in three days, if you count my church (the frogs and the trees).

I ended this impromptu tour by dropping my wife and child off at my wife's sanctuary, our local Catholic parish. My wife and I each wisely let the other dodge our own church of choice, if the spouse so wishes, so while they worshipped, I loaded up on petrol and listened to the radio.
KDHX was killing. I gather that the new schedule has its discontents, but don't count me among them. Though the station still has all of its old imbalances, reflective of its established listener base - way more rock, blues and anglo roots than (say) hiphop, jazz and world roots - it flows much better now.
For example, Songwriter's Showcase of a Sunday morning seems just right to me. I forget when it had been programmed, but I do remember not always staying with the show whenever it was on. This morning, it was perfect. The song that held me most tightly in thrall was "Chameleon" by Tim O'Brien.
What's on his mind you'll never know
His true colors never show
Good song for the political campaign season that never ends! And not that Tim O'Brien and his label don't deserve our meager money, but I found the song on a free mp3 download site. I have filed "Chameleon" into one of my favorite folders: songs for Toyy to sing on a record of covers called No Covers Tonight.
I called Larry at the station to thank him for the song, and when I got home this evening, I uploaded onto the Poetry Scores blog a story Larry wrote about the experience (a customized case of homebrew) he purchased at the inaugural Experiential Auction in 2006. It's a great story about the interconnections of friends, baseball and beer.
That there Poetry Scores blog also has all you'd ever want to know about the 2008 Experiential Auction, to be held this Sunday, Sept. 21 at Atomic Cowboy.
**
Image is a collaboration between my kid and me that I started while she was in church with her mother: a portrait of my dashboard.
Posted by Poetry Scores at 6:55 PM