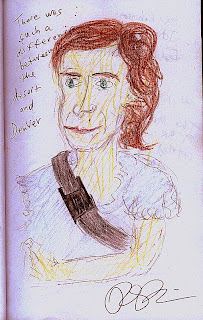 I had lunch this past week with local filmmaker and journalist Rebecca Rivas. She had got in touch tell me that The West End Word was halving its publishing schedule, from weekly to bi-monthly, so her full-time reporter job was becoming a half-time reporter job. Did I have any work for her?

Most likely not - The St. Louis American remains a weekly, but we are adequately staffed, at the moment. Rebecca is very talented, and there are many reasons we should know one another, with mutual friends (Lyndsey Scott) and dual passions for journalism and making movies, so I asked her to lunch.
When our lunch date rolled around on the schedule, my mouth was post-op and happiest when shut and still, so I mostly listened (and sketched) while she talked. She talked about growing up in the Southwest in a majority Latin culture, where the demographic used as the basis of prejudice was country of birth. I was surprised to learn that some of the fiercest anti-immigration border town bigots are Latin Americans who have been in this country for a generation or more.
Denver, from there, was a shock for her as a young girl - not only the bitter cold, but the hostile taunting white boys, who evidently felt entitled to dump on the only brown girl in class.
Thence, via the Mizzou journalism school, to St. Louis, where she came to know our sordid local politics, first reporting for The Arch City Chronicle and now for The West End Word, where a detailed series she did on commercial tax districts caught my eye as exactly the kind of civic journalism that a weekly should be doing. (Also, the kind of locally relevant stuff almost nobody reads.)
For now, she is working full-time as editor at The Word, spelling the staff editor for a few weeks. Next year she returns to Peru to work on her third film. Her first film, At Highest Risk, details the perils of health care for Andean women. Her second film, Knock Knock America, follows a group of African immigrant youth in St. Louis she met through the Center for Survivors of Torture and War Trauma. I asked her to update their stories as a (poorly paid) freelance front page report for the American, and she accepted the assignment.
I hope St. Louis can hang onto a sharp ax like Rebecca Rivas! You can find her through her film website.

Posted by Poetry Scores at 7:41 AM