Pat Egan, the Irish rover, in residence at McGurk's 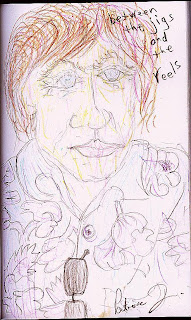 The Irish rover himself, Pat Egan (originally of County Tipperary), is in St. Louis for the next couple of weeks, in residence at John D. McGurk's, where the news (and staggering news it is) has it that the sound system has experienced a monumental upgrade.

McGurk's - known for decades as where the world's best Irish music can be seen nightly in St. Louis - and actually heard on several of the quieter nights of the week - now is a pub where music can be heard nightly, even (and here is what has the boys staggering!) heard by the musicians themselves!
I've a surprise birthday party in the city tonight, and evening business tomorrow, so I hope to see Pat and the lads (including a young man named Devan from Chicago and perhaps Tommy Martin himself on the pipes) one night or both. The pub, of course, is at 1200 Russell in Soulard.
I sat with your man yesterday in two successive public houses, enjoying my first substantial nourishment via adult beverage since my gums went under the knife a week ago. My mouth is still better disposed to staying shut while someone else perfroms the labor of rattling on about things, so I goaded to Pat to talk about life in Baltimore, the Irish music road across America, the mother back home, Michael Cooney, Tom Hall, Charlie Pfeiffer, and his perennially deferred recording plans.
On that last bit, the idea of going to Nashville to make a record with my longtime production partner Lij had finally taken root after my talking it up a great many times. I whipped out the phone and had your man on the line in Nashville right there from the tavern, and that sessions is in the works.
I'm gunning for my second "executive producer" credit. The first, also in the Irish line, would be the Michael Cooney solo pipes record, which I set up with Roy Kasten and then disappeared into newspaper deadlines, doing no further work until it was time to come pick up my copy of the sessions on Roy's doortstep. My vision of "executive production," in fact, is very long on sitting at a public house and putting the cellular communications network to maximum effect, guiding the right people to the right places at the same time, then waiting for the music to materialize.
This sketch of Pat is rather in the key of a young, scarlet-headed Oscar Wilde (or Javier Bardem), which looks very little like our man from Tipperary, of course. Maybe I'll come back from the pub with a better likeness tonight.
Posted by Poetry Scores at 1:42 PM