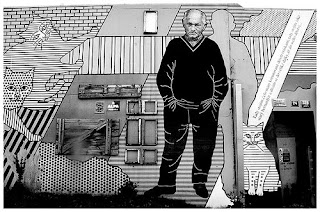 There is no threat, at this time, of a Confluence City Book Club, but I would like to invite people who like to read to enter into an adventure with me.

Last Friday a film made from my favorite-ever novel opened in New York and Los Angeles. Focussing on my little patch of the Earth, it opens in St. Louis on Friday, September 19 at The Tivoli in the University City Loop.
The novel is I Served the King of England, by Bohumil Hrabal. The film, directed by Jiri Menzel, retains the original title.
I plan to reread (actually, more like rerereread) Hrabal's novel, in Paul Wilson's standard translation, before the film opens in St. Louis. I'd like to encourage anyone who loves the adventure of a picaresque novel - and enjoys comparing filmic adaptation to source fiction - to join me.
If you are a ham, like me, I'll post your comments about the novel here on this blog and play around with them. If you are not a ham like me, I'll keep your comments to myself and take solace in having turned someone else onto this great story.
I won't say much about the novel, for now, in hopes that somebody joins me in the journey. I will say that Bohumil Hrabal (1914-1997) was a Czech writer, like the much, much, much more famous Milan Kundera (The Unbearable Lightness of Being), and if Hrabal had as many readers as Kundera, this world would be a better - a lighter - place.
I would hope there is a new trade paperback edition of the novel in English translation getting rolled out along with the movie, but my friends in book publishing tell me that ploy is being reserved, increasingly, for blockbusters. I just did a half.com search for the title, and found three used copies, ranging in price from $1.99 to $8.66. An Amazon search turned up 26 copies, starting at $2.75.
It's out there. Go get it!
*
Collage of Hrabal is by somebody named Bartek Nowicki, from his Flickr site. Brother Nowicki is so under the spell of Hrabal he spent two of his six days in Prague trip following "his life path."
Posted by Poetry Scores at 4:50 PM