Orchestral maneuvers in the dork 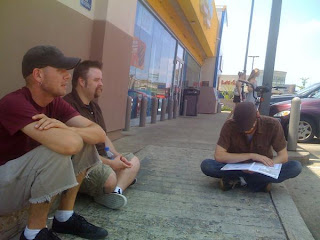 I am not, as the hip-hop kids say, "feeling it," but that is only because it's not meant to be felt. It's meant to be heard and thought, and I'm definitely hearing it and thinking it today while I'm cleaning out my dirty car.
Lunch?!? is not really meant to be felt. It's meant to be imagined and feared - music to be assassinated by. The new record lives up to the band name: This is music for accidental popular icons to be assassinated by.
I would like to pay this record yet another mindfelt compliment that could be mistaken as a hurtful insult. Lunch?!?'s "orchestral maneuvers" aspect evokes good, old, early Genesis. The record opens with brooding, epic, piano rock. That lilttle episode gets hijacked by Mission of Burma doing complicated math exercises, but the Genesis epic mood sprawl thing remains.
Local musical publicity history sidebar: A local group once paid me a little something something for a band bio. In my bio, I compared the band to Fleetwood Mac, ca. Rumors - an impossibly noble compliment (I would have thought), with the touch of the paid publicist in it, since that band (as almost all bands) was not nearly as good as the Mac was back then. The local band was so insulted they paid somebody else to rewrite their bio. The final version was full of references to then-buzz-"It" bands that few people would recognize today.
Addendum: the final movement of Track Four (4) on Lunch?!? made me feel something. Since I felt something about a song titled, once I checked the credits, "Pillow Biter," I feel like The Pat Sajack Assassins tricked me! They assassinated me!
*
My copy of Lunch?!? brought to me by John Eiler (thanks!). Photo, from their MySpace page, is of the band conferring upon the dispiriting news that Gustav had blown their New Orleans gig out from under them. Three songs from the new record on posted up on the MySpaz page as I click "Publish Post".
Posted by Poetry Scores at 11:34 AM

...and check out my crazed verse "Organization" on the final track!
We've got them at the Schlafly Tap Room on October 25th, too.
Check 'em out live for sure.

i don't know nothing from nothing about the pat sajak assassins but you should check out quief quota....

I like Brett's prose a lot on that last track. If I had been doing a serious review rather than having fun while cleaning out my car, I would have transcribed some of it and worked it in.

Loving it. They remind me of SHed SHot, my favorite local St. Louis band.

Thanks for the review! One small note: It is spelled "Pat Sajak Assassins" (no 'c' in the name).

From your neighborly dork: Joe