You have been drafted to Taste for Tunes 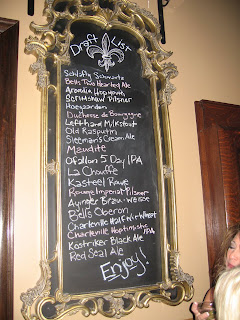 Just a reminder that if you do it right today, some of the money you spend to feed your face and your beer habit will go toward supporting community media in St. Louis - specifically, KDHX 88.1 FM' that's http://www.kdhx.org/ on your internet dial.

It's the annual Taste for Tunes fundraiser!
My buddy Stevo Green (beer curator to the stars) and I are cohosting dinner at The Stable, Lemp at Cherokee in South St. Louis, where 20 percent of the register ring will go to great locally programmed music and community building.
If you want to avoid Stevo and me but still support KDHX, then follow the Taste for Tunes link, above, and eat and drink at one of the other venues today. I see Atomic Cowboy (host of the 2008 Experiential Auction on Sunday, Sept. 21) is donating 100 percent of food receipts to the cause.
If you want to visit with Steve and me, then meet us at The Stable around 7 p.m. We'll be there until late (late, for me, is about 11:30 p.m.). I have about a dozen confirmed fellow diners, and who knows what cats, dogs and wolves Stevo will drag in.
*
Photo of the beer board at The Stable from the essential STL Hops blog. But the beer list will have changed many times since this picture was taken in June. From STL Hops:
"If The Stable doesn’t win some sort of award next year for best beer selection in a restaurant in one of the local magazines, I may just have to give up hope for this town. The devotion to beer that everyone involved with The Stable has is just mindblowing. With over 20 hand-picked draught choices and another 15 in bottles, The Stable proves that having the largest selection doesn’t necessary mean you have the best selection. Two other extremely encouraging tidbits I picked up was that this will be a rotating selection, so that beer you had on your first visit may not be there on the second. Also, they’ve made the promise that you’ll see no beer with the word 'Light' in the name."
Posted by Poetry Scores at 7:27 AM