How to beat Slay at midnight basketball 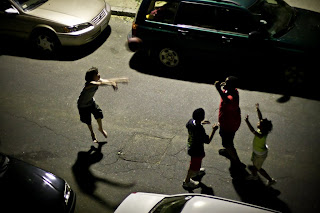 I spoke with attorney Chet Pleban this afternoon about The City of St. Louis' red light camera program and how to beat it.
Pleban is sourced in some solid Riverfront Times reporting about the program. I had made use of that reporting in the Political EYE column in The St. Louis American after a City alderman told me he thought the red light camera program could be "the midnight basketball" of the Francis G. Slay administration - i.e., the boondoggle that unravels everything else.
A dear friend of mine remembered that Political EYE item and turned to me for (gasp) legal advice. I sent her that RFT story. She said she still wasn't sure what she should do. So I called Pleban.
By now - partly assured by me that the City can't legally prosecute contested red light camera violations, and partly double-booked for a funeral - she had missed her court date. Pleban insisted she needs to get a new court date. He advised she go Downtown to deal with the situation in person rather than getting lost over the phone.
"Some lawyers have advised to just ignore these notices," Pleban said. "But you don't want a secondary charge of 'failure to appear' to complicate things."
Until she gets a new court date, Pleban said, they can't issue a warrant for an arrest. "If they won't give her a new court date, she should write them a letter saying they can't prove that she was driving the vehicle when the camera took the picture of her car. And she should say, if they issue a warrant or try to arrest her, she will sue for a violation of her civil rights under Title 42, United States Code, Section 1983."
Pleban wanted to know if my friend was "the Lone Ranger" on the ticket. I had a copy of it. "No," I said. "It's addressed to her and to her husband." Pleban snorted, "See, right there: How can they accuse them both of the same crime at the same time?"
Pleban said he soon would be readying a class-action case on behalf of the people who have been paying the $100 violations from the red light camera program. "They promise people if they send in their $100 they won't report them to the Department of Revenue, but the statute says they have to report you to the Department of Revenue - and the municipal ordinance can't override state law."
I have developed a rapport with Pleban recently in trying to understand what is going on between the City of St. Louis and one of his clients, Director of Personnel Richard Frank. I suggested some time ago that Frank was being cannibalized by his former allies within the Mayor's Office. Pleban recently filed a motion I will try to untangle in this week's St. Louis American that argues this point in detail (without the "former allies" backstory, which I conjecture from what I saw of the Sherman George takeout).
"It's amazing the stuff they pull, their arrogance," Pleban said of Slay and his Chief of Staff Jeff Rainford. "And they don't care. They go about their business as if they are infallible."
Are they infallible?
"No," Pleban said. "I don't think so." He thinks there is enough evidence of dysfunction and corruption in the Slay administration to bring it down. "But then I might be out of work!" Pleban said. "I'd go hungry if it wasn't for these guys."
*
Pic from somebody's Flickr site.
Posted by Poetry Scores at 7:19 PM

chet pleban is a hypocrite, an ambulance chaser of the worst kind.

you should consider your sources, particularly when they are scum bags, before printing what they say

Unfortunately, Anonymous, I can't take your advice and consider your value as a source, since you won't share your identity.

As for Pleban, he has beat the City enough times that he doesn't need to chase any ambulances. The ambulances come right to him!

what about his conflict of interest?

i think you're too scared to address that....

Hello Darkness, my old friend. I mean, Anonymous. I'll let Chet Pleban answer to allegations against him, he's paid for that work. What scares me are ghosts who haunt Comments pages on personal blogs, anonymously spewing insinuations and venom. Spooky!

I totally misunderstood the topic of this post when I first glanced at it a couple of days ago.

I thought that Slay had installed some sort of infrared cameras to spy on folks playing basketball at night. Really, that's what I thought!

Those stop-light cameras were a nightmare, though. My girlfriend and I both got -- and paid -- $100 tickets. That's money we sure could have used. I could have used part of it to pay some library fines and thereby help fund something that provides a wonderful service to a lot of folks. As it is, we might as well have burnt that $200....