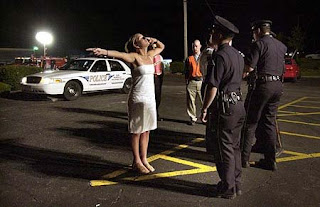 From the people who brought us citizens' impounded vehicles made available to the daughter of the chief of police, we now bring you ...
A stealth sobriety checkpoint! Somewhere! We're just not saying where!
Whereas police departments usually announce sobriety checkpoints in advance, specifying the actual point where they will be checking for sobriety, the St. Louis City cops want you to know they will be checking tomorrow for sobriety ...
Somewhere.
Here is the release, today, from former TV news reporter Erica S. Van Ross, who now does PR for the police:
Traffic Division of Metropolitan Police to hold Sobriety Checkpoint
The Traffic Division of the Metropolitan Police Department of the City of St. Louis will hold a sobriety checkpoint on Friday, September 5th. The time and location of the checkpoint is being withheld.
WHO: Traffic Division, Metropolitan Police Department
WHAT: Sobriety Checkpoint
WHEN: Friday, September 5th
WHERE: An undisclosed location in the city of St. Louis
The supense is killing me here!
Posted by Poetry Scores at 1:52 PM

Why do they announce where they will be usually?
Is it illegal not to announce that you are declaring a little Marshall law?

...er, ugh, martial law.
Pardon me, I've been reading about the Marshall Plan and getting all nostalgic...must've slipped through my inner dictionary.

So, Chris, according to your view of the world, the St. Louis Police Department can do no right? Why are you so angry?

They (the Cops) love the entrance to Highway 40 on Jefferson.
Good luck avoiding Johnny Law.

We love you, Anonymous!

Anonymous,
You must have checked your sense of humor at the door with your name. This is a piece of humor. If you get a lot of announcements of cop stops, as I do, this one leapt out for its absurdity.